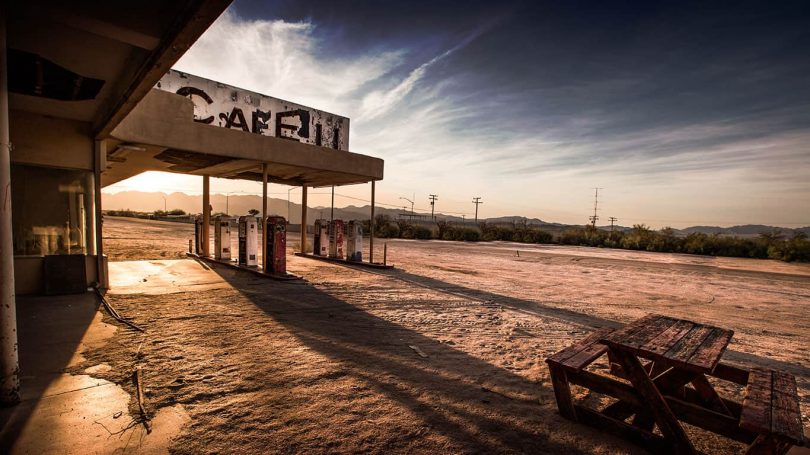 Written by Joe Pye
Debt.com strives to provide our users with helpful information while remaining unbiased and truthful. We hold our sponsors and partners to the highest industry standards. Once vetted, those sponsors may compensate us for clicks and transactions that occur from a link within this page.

Why buy a new house when you can buy a deserted town for the same money?

The median price for a home in this country is $294,000, according to Zillow. But you can spend less right now and live in your own town – all by yourself.

So if you’re a history buff or a paranormal fan – many of these deserted towns are alleged to be haunted – check out these listings. Some are currently for sale, others were bought recently and might come back on the market soon…

Woodside peaked in 1910, when 328 people lived there. By 1920, its railroad station and livestock shipping facilities were moved to another town. A decade later, the population dropped to 30.

The empty town went up for sale in 2012, but no serious buyers wanted to pay the asking price.

“The people who came to look at it were a little disappointed,” real estate broker Mike Metzger says. “They were expecting a Hollywood movie set, and it was nothing like that.”

Which means you can still make an offer.

These 154 acres are on the outskirts of a town called Helper. It was originally part of a mining town founded in 1927. In 1931, a fire gutted the mines. There are still the foundations of 30 buildings on the property.

Visitors have claimed to have seen ghosts, which gets extra-spooky because the town is located so high in the mountains that cell phone reception is impossible.

The name means “fat hill” in Spanish. These 300 acres in the California mountains include an abandoned church, hotel, and bunkhouse, plus some homes.

During the 1860s and 1870s, 5,000 people lived here. It was a raucous town – real estate broker Jake Rasmuson says when the town was at its peak, it averaged one murder per week. That leaves plenty of spirits to be wandering around this ghost town.

Near Cerro Gordo is this old silver-smelting town. At 33 acres, it’s a tenth of the size of Cerro Gordo and has several shacks on a dry lake bed created when the City of Los Angeles diverted its water. It’s located 3,661 feet up, right at the base of some mountain pine trees.

A nonprofit organization called the Center for Land Use Interpretation purchased the property in 2013. Will they put it back on the market? Time will tell.

Like many other deserted towns in America, this was once a gold mining boomtown. So, along with the 12 acres of land, the buyers also walked away with a literal gold mine – and a bar with a liquor license.

The previous owners of Seneca originally purchased the property for $60,000 in the 1970s, which makes it about break-even in today’s dollars.

For sale. Last listed at $1.5 million

Named after its founder, George Millican – who was a cattle rancher and miner – the town has 74 acres of property, a post office, gas station, and an old store.

Established in the late 1880s, Millican housed 60 residents at its peak in the early 1900s. But most fled after World War I. Since then, it has had an on-and-off population of one.

It went up for sale a decade ago but didn’t sell. It was relisted July of last year.

Sold for an unknown amount in January 2017

This spooky town went on the market – or at least Craigslist – for $350,000 in 2016. The five-acre piece of property includes a gas station, a restaurant, private shooting range, two homes, and an eight-room motel.

The town’s history is murky. Local legends say the townspeople fled the Cabin Creek in the 1970s out of fear, following an unsolved murder.

James Johnson purchased the property 38 years ago to turn into a roadside tourist attraction, but he and his wife wanted to retire and move on.

At the end of the 19th century, 2,000 people lived in Saint Elmo. Now? No one does. Except maybe spirits.

Locals call these 4.14 acres haunted. In 1881, a cattle rancher named Anton Stark moved to town. In 1890, a fire reportedly destroyed the business section of town, and it was never completely repaired. Four decades later, descendants of the Stark family were the only ones left. Many believe the ghost of Anton’s daughter Annabelle still haunts the town.

Be the proud owner of six acres of land, a home, and a tavern – if you don’t mind living among the paranormal.

This supposedly haunted town was named after its founder, a farmer by the same name. When the town thrived, 40 people called it home. The current owner purchased the property in 1998.

Maybe a whole town isn’t what you are in the market for. Forty percent of Americans are willing to buy a haunted house if the price was discounted.

After being abandoned for two decades, this 62-acre ghost town sold last year to Iglesia Ni Christo, a Philippines-based church. They’re known for purchasing vacant land and converting them into gathering places for members to worship.

Along with the extensive acreage, the buyers got several homes, a post office, a store, and an old Victorian church. Its mill burned down in 1972, following a lightning strike.

To put the creepy icing on this ghost town cake, it is rumored to be haunted by Emory Johnson, the town’s founder.

These towns are considered “unincorporated,” meaning they aren’t part of a local government. That means even if the price is good, the unique nature of these places makes buying them more challenging than with most homes.

Getting a loan is harder

Real estate broker Mike Metzger sells the typical standalone family home in Utah for around $150,000. A larger “executive-size” home goes for about double that.

Given the acreage these “ghost town” properties tend to come with, he feels they make an interesting purchase in comparison.

However, lenders aren’t too eager to help buy these kinds of properties. It’s not the same as getting yourself a mortgage. And putting insurance on the property is a challenge, too.

“It is very difficult to get a loan for these types of properties,” Metzger says. “Most times, it’s going to be a private sort of banking, with loans based on the individual and the relationships they have with the bank versus your traditional ‘square box financing.’”

Metzger continues: “Fannie Mae and Freddy Mac and FHA are not touching these properties.”

The living is tougher

Finding running water, electricity and other utilities is often a problem for buyers, too. With some of these properties, you need to search miles away for running water and electricity. Many of the structures may be uninhabitable due to years or even decades of neglect.

“Most of the structures in ghost towns aren’t up to code,” Metzger says. “They were built before the code was invented. They’re probably the reason code was invented, because as they were finished, they were running out of materials.”

Of course, a ghost town isn’t for the faint of heart or the thin of wallet. But to those history buffs and nostalgia seekers, when one of these properties goes up for sale, it’s a once-in-a-lifetime offer to own a huge chunk of land – and maybe even the supernatural.

Joe Pye began writing about debt and personal finance more than three years ago while attending Florida Atlantic Univerisity, where he served as Editor-in-Chief of the student-run newspaper, the University Press.

Before graduating with a bachelor's degree in multimedia journalism, Pye placed as a finalist for the Mark of Excellence award by the Society of Professional Journalists Region 3 for feature writing and in-depth reporting.

Since taking a full-time position as associate editor at Debt.com in 2018, Pye has become a certified debt management professional who's applied what he's learned to his personal life by paying down more than $22,000 worth of combined credit card, student loan, auto and tax debt in less than two years. He maintains a frugal and debt-free lifestyle.

Pye's goal is to uncover trends in the financial world and share his experiences to help readers stay out of debt.