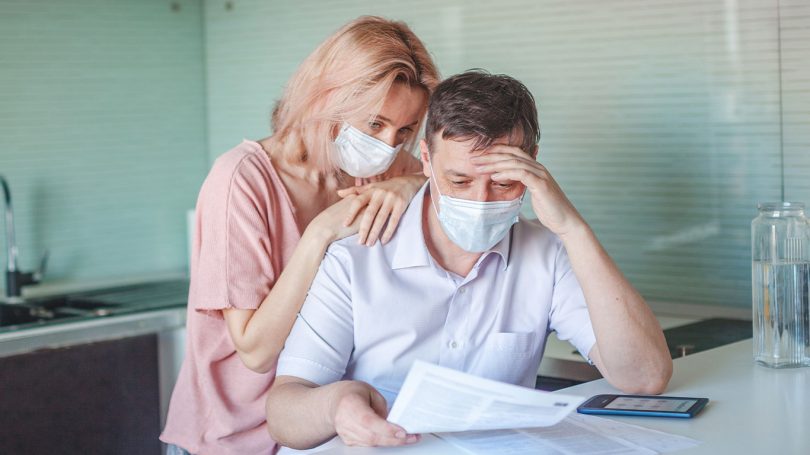 Written by Deb Hipp
Debt.com strives to provide our users with helpful information while remaining unbiased and truthful. We hold our sponsors and partners to the highest industry standards. Once vetted, those sponsors may compensate us for clicks and transactions that occur from a link within this page.

Now that COVID-related lockdowns and mandates have eased in most cities, many Americans report they had problems paying medical debt in 2020, according to a new report on COVID-19 and health care coverage from The Commonwealth Fund.

At the same time, the percentage of uninsured Americans is lower than in years past, the survey found. Even as more Americans have health insurance than in the past, however, many still struggle to pay medical debt – and the uninsured have taken an even bigger hit.

Below are seven findings from The Commonwealth Fund’s July 2021 report.

Those directly affected by the pandemic struggled more

Around 35% of those surveyed said they used up “all or most” of their savings due to medical bills and debt problems, according to the report. More than a third (35%) had to take on credit card debt to pay medical bills, 27% were unable to pay for food, rent or other basic necessities, and 23% had to postpone education or career plans to pay the bills.

The Commonwealth Fund survey found that roughly 10% of Americans ages 19 to 64 were uninsured in the first half of 2021. That percentage falls below recent estimates found in annual surveys by the U.S. Centers for Disease Control, the U.S. Census Bureau and some private surveys conducted in 2020, according to the report.

The lower percentage of uninsured Americans could be due to relatively small pandemic-related losses, federal restrictions on Medicaid disenrollment during the pandemic, Healthcare Marketplace special enrollment periods, increased Marketplace subsidies and COBRA premium support, according to the report.

Some lost employer coverage but others gained

“The Affordable Care Act’s coverage expansions also acted as an insurance safety net: 16 percent of people who lost coverage enrolled in Medicaid and 9 percent purchased a plan through the marketplaces” says the report.

Of those surveyed who lost employer-sponsored health insurance and did not get COBRA, 54% obtained new health care coverage within three months or less, according to the report. About 18% were covered again within four to six months, and 11% found new health coverage in seven to eleven months. Around 16% went a year or longer without coverage.

Some groups hit harder than others

More than a third (34%) of those surveyed said their income fell during the pandemic. People who work in the service industry were especially hard-hit, along with Black, Hispanic and lower-income adults. “These groups were more likely to report having lost income than white or higher-income adults,” says the report.

Around 38% of adults surveyed said they or a family member had problems paying medical bills over the prior 12 months. Many in that percentage said they were contacted by a collection agency about medical debt, had to alter their way of life to pay the bills or were still paying off medical bills and debt over time.