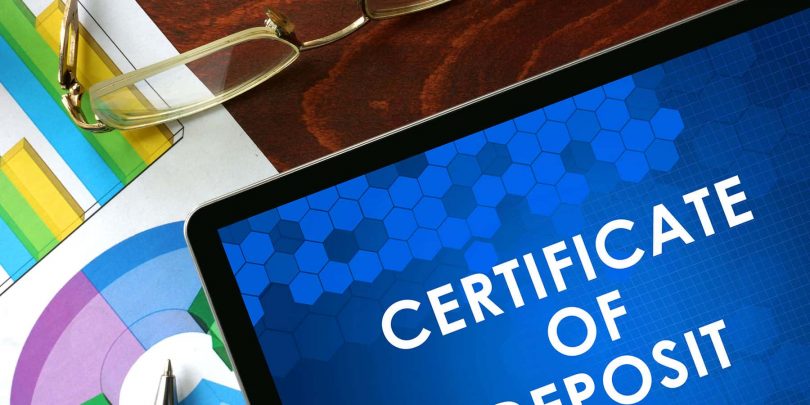 Written by Simon Zhen
Debt.com strives to provide our users with helpful information while remaining unbiased and truthful. We hold our sponsors and partners to the highest industry standards. Once vetted, those sponsors may compensate us for clicks and transactions that occur from a link within this page.

For many people, the standard option for building savings is a savings account. To increase savings even faster, you might consider a certificate of deposit (CD).

However, a CD does have a strict rule that makes it very different than a savings account.

A CD is designed so that you’re not supposed to deposit or withdraw money after opening it. You lock in a lump sum of money for an extended period of time. In return, the bank will likely pay a higher interest rate than a regular savings account.

Generally, you have to open a CD with a long term (usually 5 years or longer) in order to earn the highest APYs — these rates lock in for the entirety of the CD term.

Or, you don’t want to lock too much money at a lower rate, assuming the CD rate increases significantly in the future.

How a CD Ladder Works

The idea behind a CD ladder is to stagger multiple CDs. This way, you’re going to guarantee that you’ll have access to at least some of your money every year. All the while, you’re earning the top CD rate at the time because you’re not just locking in a short-term CD.

Upon initial setup of a CD ladder, you open the following CDs:

As each CD reaches maturity, move that money into a 5-year CD. That means, after the 4th year, you should have five 5-year CDs. But, after each year, one of those 5-year CDs will mature — available for withdrawal if you want. Otherwise, like before, you simply open up another 5-year CD with that money.

It is important to point out that most CDs tend to renew automatically under the same term with the current interest rates.

For example, if the CD originally had a 1-year maturity term, it will renew for another year with the updated interest rate.

Because the initial setup of your CD ladder will transition to using 5-year CDs entirely, you want to set reminders for the first few CDs to not renew automatically. (Most CDs have a grace period of up to 10 days that allows you to pull the money out of the CD without any penalty.)

After your CD ladder consists of only 5-year CDs, then you can let everything renew automatically (though you should find opportunities to deposit more money into the CD if you can afford to do so).

As noted earlier, a CD ladder allows you to earn high-interest rates while still having some free cash every year. It also helps diversify risk during a changing interest rate environment.

A CD ladder helps alleviate concerns regarding the accessibility of your cash because a CD will mature annually.

If you think you’ll need the money, you simply opt to not renew the CD and you’ll have the cash available for whatever you want.

However, do note that most CDs allow you to take early withdrawals. That is, you opt to close the CD before it reaches maturity. Usually, this action results in an early withdrawal penalty, which varies from CD to CD.

When you open a CD, you lock in the money and the interest rate. In the next couple of years, that interest rate could double for the same exact CD. So, you’re stuck earning a lower interest rate on funds that you cannot take out while the current CD rate is much higher.

If you put all your money into a single CD, that’s a missed opportunity to earn more interest.

With a CD ladder, your money is split in a way that allows a portion of savings to earn the highest interest rate possible at the time of CD opening.

Now, this strategy can also turn against you in the event that interest rates drop. However, a CD ladder diversifies the interest-rate risk.

Certificates of deposit are available from banks and brokerages. Depending on where you open the CD, the CDs may work differently, especially when it comes to FDIC deposit insurance.

Most banks offer FDIC insurance on their deposit accounts, including CDs, while brokerages do not.

With FDIC insurance, you can rest assured that your CD deposits are covered in the event that the bank shuts down. The coverage limit is $250,000 per person per account ownership type at each FDIC-insured bank.

That means you can safely keep a total of $250,000 across all deposit accounts at the same bank. You can get an additional $250,000 in coverage at that bank if the money is kept in joint accounts.

While a CD ladder sounds like a fancy financial technique, it really isn’t a complicated strategy.

Yes, it may take some time to fully have it set up. But, you’ll end up reaping the benefits of much higher interest earnings on your savings.