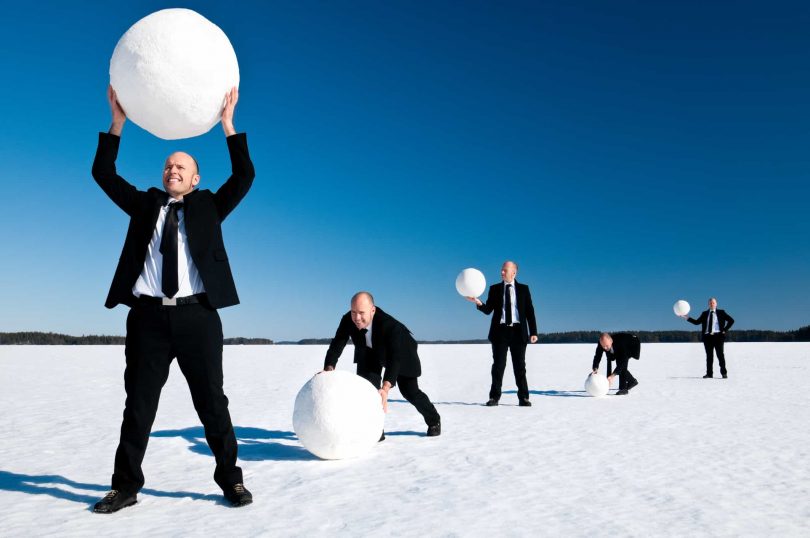 Written by Brian O'Connor
Debt.com strives to provide our users with helpful information while remaining unbiased and truthful. We hold our sponsors and partners to the highest industry standards. Once vetted, those sponsors may compensate us for clicks and transactions that occur from a link within this page.

Tackle your high interest first to save yourself time and money.

If you want to start a knock-down, drag-out fight among a group of personal finance experts,  just ask, “What’s the best way to pay off my credit cards: lowest-balance first, or highest interest rate first?”

Then stand back and watch the fur fly.

Thousands of words have been devoted to the topic. However, the only real differences between the two approaches are slight. On one hand, the highest-rate method cuts the amount of money you need to pay back to the absolute minimum. On the other hand,  the low-balance method can keep people motivated over the long haul to cut their debts.

And, in the end, when you do the math, it doesn’t make a whole lot of difference. Both approaches start with the same basic moves.

You stop adding to your card balances and freeze your monthly payment at your current minimum amount due. You pay the same amount every month. As your principal shrinks over time, your payment is then more than the minimum amount. This way your payment, compared to your balance, actually increases every month. Simply taking these actions will accelerate your time to pay off debt by quite a bit.

You can add extra cash to your payment to pay off debt faster. Now this is where the debate starts. Which is most effective? Putting extra money to the card charging the highest interest rate or to the one with the lowest balance?

The classic approach is the “debt snowball.” This is where you aim the extra cash at the card with the lowest balance. Pay that card off, then take the money you’ve been paying to that card monthly and direct it to your next card with the smallest balance.

The alternative is to put the extra money toward paying off the card with the highest interest rate. Some argue, the sooner you pay off the most expensive debt, the more money you’ll save. Once your highest rate card is knocked off, you take the money you’ve been sending to the paid-off card and add it to the monthly payment on your remaining highest-rate card. Keep doing that until all your cards are paid off.

How do these approaches add up? Let’s look at the numbers.

Now let’s say you comb through your budget and find $50 you can throw at one of those card balances. Where should it go? If you target your highest-rate card, you’ll pay it off in less than five years and cut your interest payments by more than $3,100. If you target your smallest balance first, that approach takes three months longer. And although it saves you nearly $2,600 in interest, that’s $541 less than you’d save with the highest-rate approach.

More than $500 isn’t chump change and nobody wants to be in debt any longer than necessary. In that sense, it’s well worth exercising some discipline to follow the highest rate approach. That’s only if you can maintain it, though.

But the most effective debt payoff plan is the one you can maintain over time while you build good financial habits. Get discouraged because you don’t feel that you’re making significant progress, and you’re likely to quit and end up paying even more toward your debt. If that’s your case, then knocking your smallest card balance off first is the way to go.

The thing to focus on is the fact that, under either method, you’re cutting your repayment time by more than half and saving thousands of dollars. And whenever your debt is paid off, you have more money to put toward your own financial priorities and not your debt — and that’s your real goal.

Brian J. O’Connor is the author of the award-winning budget book, “The $1,000 Challenge: How One Family Slashed Its Budget Without Moving Under a Bridge or Living on Government Cheese.”