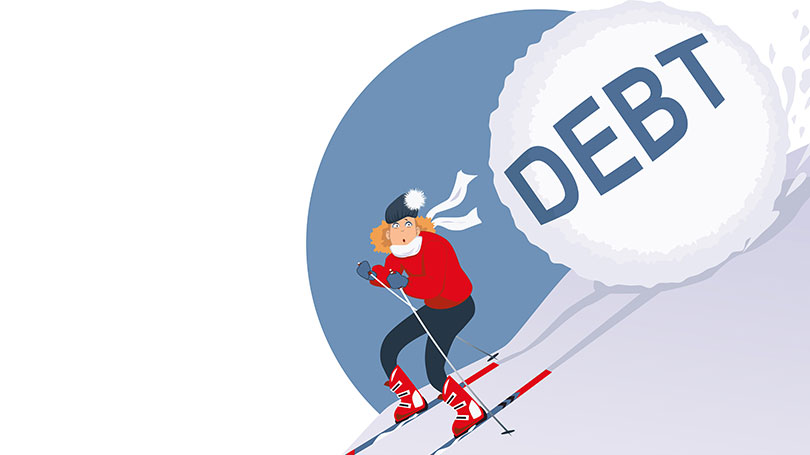 Written by finder.com
Debt.com strives to provide our users with helpful information while remaining unbiased and truthful. We hold our sponsors and partners to the highest industry standards. Once vetted, those sponsors may compensate us for clicks and transactions that occur from a link within this page.

How paying off your highest-interest debts first can save you in the long run.

If you’re looking for the best way to pay off debt, there’s a good chance you’ve heard of Dave Ramsay’s debt snowball method, which involves tackling small debts first as motivation to pay down larger debts. However, his method is criticized for allowing interest to accrue on larger debts, which is where the debt avalanche method comes in.

What is the debt avalanche method?

You’ll make the minimum payments on all of your debts and put any leftover cash toward the highest interest debt. Once the highest debt has been paid off, you’ll move on to the next highest debt, dedicating any extra cash to paying it down as quickly as possible.

How does it work?

In order to make the debt avalanche method successful, there are a few steps you’ll need to follow:

Let’s take a look at an example to give you a better idea of how the debt avalanche method works. Say you have five debts, ranked from highest interest to lowest:

With a monthly budget of $500 toward unpaid debts, you’d pay the minimum amount on each for a total of $250. You would then put the remaining $250 toward Credit Card 1.

Once that debt is paid off, you’d move on to the next highest-interest debt in the table. While it might take you longer to pay off each individual debt, you’ll be doing so in the most cost-effective way, as you’ll be spending less on interest over the course of your repayments.

What do the experts say?

Unlike the debt snowball method, the debt avalanche method focuses on math to determine the most efficient and cost-effective way to pay off debt. While this method won’t provide motivation along the way, it will save you more money in the long run because it decreases the amount you’ll be paying in interest.

The Journal of Consumer Research recently determined that consumers who pay off smaller balances in full were able to get out of debt faster than those who focused on larger amounts. However, this doesn’t take into account how much more money you’d end up spending on interest. From a purely mathematical standpoint, the debt avalanche method is the best debt payoff strategy, but only if you’re able to commit to the plan.

Is the debt avalanche method right for me?

Like any financial strategy, there are pros and cons to the avalanche method.

Alternatives to the avalanche method

Not sure the debt avalanche method is right for you? Here are two other options to try:

This is one of the more popular debt payoff strategies, as it focuses on paying off small debts to motivate you to pay down the larger ones.

You’ll start by organizing your debts from smallest to largest, then allocate any extra money in your budget to pay off the smallest one first. As you pay off your debts, you’ll free up more money, which can help you pay off even more bills.

However, keep in mind that this method doesn’t take interest into account, so your debts will cost more in the long run.

This lesser-known approach is compatible with both the debt snowball and debt avalanche methods, helping you pay off debt sooner.

It works by adding up small day-to-day savings to increase your monthly budget for debt repayment. You can either do this yourself by making conscious decisions to save in everyday situations or use an app that rounds up your purchases.

In any case, these small daily savings will add up over time, allowing you to make larger payments toward your debts.

The debt avalanche method helps you pay off debts as soon as possible while minimizing interest charges, but it requires a long-term commitment. If you’re looking for easy wins to motivate you, you might want to consider the debt snowball strategy instead.

Compare debt consolidation options to find other ways to save on interest, or consider debt relief if your debts account for over 50% of your income.

This article originally appeared on finder.com.