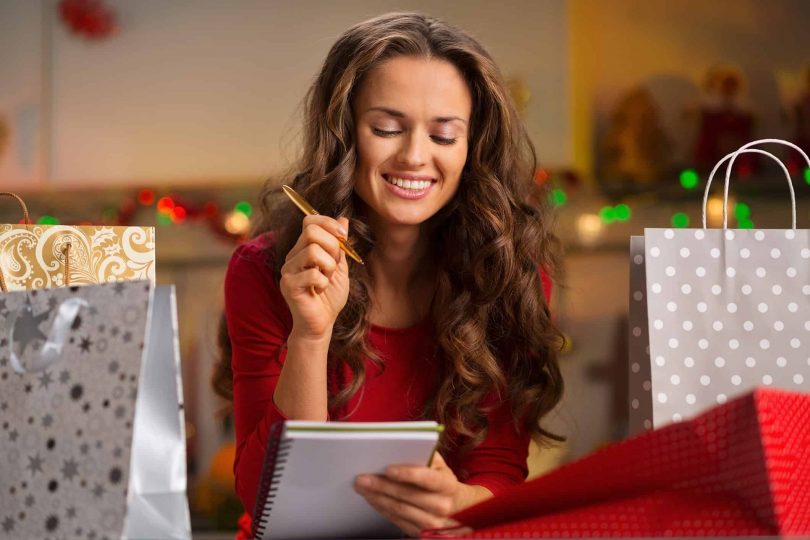 Written by Michelle Bryan
Debt.com strives to provide our users with helpful information while remaining unbiased and truthful. We hold our sponsors and partners to the highest industry standards. Once vetted, those sponsors may compensate us for clicks and transactions that occur from a link within this page.

Nothing sounds more Scrooge-like than hearing this during the holiday shopping season: “Don’t spend so much money spreading joy and cheer! Stick to a budget! Bah, humbug!”

Still, we all know the regret and horror that comes in January, when the credit card bill arrives for December’s purchases. Here’s the thing: You don’t need to be a Grinch to save money this holiday season. If you need convincing,  Debt.com polled other financial experts to ask for their advice. Here’s their holiday gift to you…

All too often, we simply impulse buy our extended family and friends gifts during the holidays. Maybe this year, you keep the list small and only send Christmas cards to people like aunts or cousins who normally would have received a gift from you.

I have one credit card that just passively earns a flat-rate cash back all year. Then I use the cash-back rewards as part of my holiday shopping budget. Basically, it’s a small savings account for holiday shopping. The other thing I do is to start early, around September. That way, I can buy a few gifts a month up until Christmas, and then it isn’t just one big budget buster at the end. Instead, it’s been cash-flowed nicely into my regular spend.

One holiday season, I managed to overspend on gifts and electronics so much that I had grown several credit cards near about $7,000. I was approached by a personal loan company about consolidating the credit card debt, and they offered a very fair interest rate.

I took the loan, and it felt somewhat of a relief paying off those balances while I still knew I had to pay off the loan. The difference is that with a credit card, temptation to keep a similar balance was there – but with the loan that was eradicated.

Re-gifting is underrated. If you have gift cards you haven’t used in more than six months, you probably won’t use them. Think about re-gifting them to someone who will.

Take out cash. You might give up some mileage points, but that will pale in comparison to the extra that you’ll spend on the card. Online sites are designed to be like Las Vegas with the motto of “We will separate you from your wallet!”

Before we decided to eliminate all of our debt, we were spenders – holidays included! After we ran up our credit card balances for what seemed like the zillionth time, we created a budget. To keep us from going into debt further during the holiday season, we discussed with our families a new, budget-friendly approach to gift-giving. Instead of buying gifts for everyone, we purchased gifts for kids only. Everyone we know has too much stuff already, so it wasn’t a big deal to cut back.

I used to wing my holiday purchases, and part of the problem was my working primarily in retail where every bargain, markdown, and special sale passed by me for my approval and perusal. The only way to counteract the temptations of the retail world, whether you work in it or not, is to plan your holiday season purchases first with a budget – and then with a sense of thought and purpose.

I try to make my holiday spending and gift-giving centered around the thought and the personal touch more than the flash and glitter of something bright, shiny, new and expensive. With a little discipline, I think everyone can certainly cut back on the flamboyant gift-giving aspect. I think people appreciate gifts that are practical and homemade and useful, as opposed to just spending and trying to impress based on dollar values.

Forget about splurging on gifts or travel. The holidays are the one time where I remain unconvinced that cooking at home is economical – particularly for small families. After all costs (denominated in both dollars and stress) are considered, I’m becoming an ever-greater advocate toward buying a great take-out meal. Financially, it’s comparable. (Cheapism estimates the cost of cooking at $12/person, with take-out options in the same range.) However, the holidays are preciously brief, and having those hours alongside family – trimming the tree, watching the Lions lose, or laughing about Aunt Mary – is certainly worth any meager price difference.