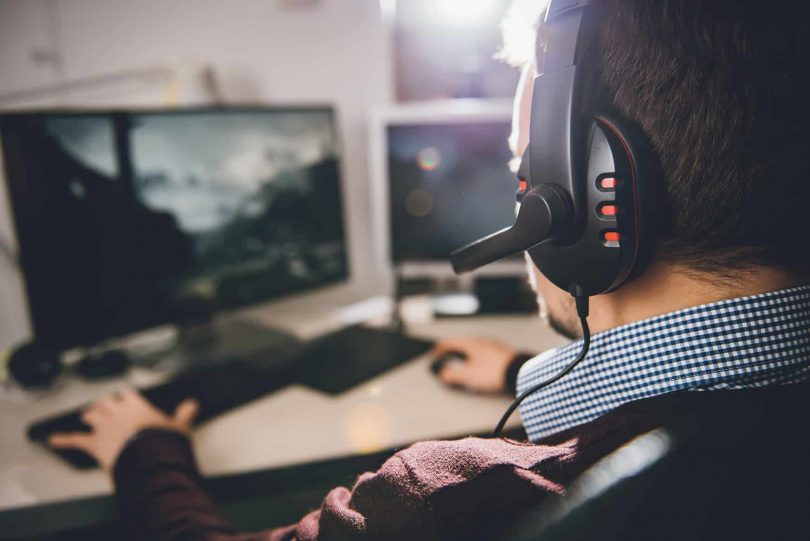 Written by Andrew Fraieli
Debt.com strives to provide our users with helpful information while remaining unbiased and truthful. We hold our sponsors and partners to the highest industry standards. Once vetted, those sponsors may compensate us for clicks and transactions that occur from a link within this page.

Don’t blow your budget when you blow up bad guys.

They say it takes 10,000 hours to become an expert at something. I’ve been playing video games for 19 years. And no, I’m no pro-gamer, but I have learned a thing or two over time – gaming is expensive and ever-changing.

I was three years old when I got my first Game Boy. Now I have boxes and shelves of Sony, Nintendo, and Microsoft games going back decades. I’ve probably spent a small fortune on video games ever since I started paying for them myself. I’ve since moved to PC for cheaper costs, but here is how I’ve managed not to go broke in the modern age of video games.

Preordering games, or buying them before they’re released, is generally just a way to guarantee yourself a copy of a game. When physical copies were the only way to play, it was sometimes a good idea, as stores would run out. Now though, it’s just a way for developers to guarantee they’ll get paid, whether you end up liking a game or not.

Join the 21st century and look at YouTube Reviews the day a game comes out to see if you’ll like it, without surprises. The only exception to preordering would be if it’s a sequel to a game you plan to buy no matter what.

What happens to all those people who preorder games, or buy them immediately and don’t like them? Look at GameStop: They all try to sell the game back. They won’t get much, but within a week you’ll see brand new AAA games – the biggest titles with large development budgets – out for almost $10 cheaper. Wait a month or so and they’ll drop to almost half the price, depending on the game.

At the moment, most new AAA games are $60 when they come out. A year or so later, these games drop to fractions of the price, allowing you to buy double the number of games. Most video games just don’t hold value.

“Bioshock Infinite” is another good example. It was huge when it came out in 2013 and won multiple gaming awards. Now? Less than $10 on Amazon.

Wait for a whole generation of systems – three to five years – and games become more like $5 a pop. Waiting that long isn’t exactly ideal, but for nostalgia’s sake, it’s great to buy all the expensive games you couldn’t before.

Downloadable content (DLC), or extra content created after a game’s release, is another way that companies are getting more money from you. They used to be free extras that game developers didn’t have time to finish before release. Now they are practically major parts of the game you have to pay more for. You know what happens when you wait a year for that AAA game though? Ultimate packs.

PC has an immediate advantage over any console, handheld or phone because of Steam. Owned by Valve, a video game company itself, it’s home to AAA games and more indie games than you can fathom.

Besides not having to deal with a physical retailer like GameStop or eBay, the advantage of Steam is its seasonal sales, where you can get most AAA games a good 30-40 percent off and daily smaller sales on indie games.

Indie games on Steam generally are very cheap anyway, $10 or less, and can be just as entertaining as bigger console games. A good, fun game doesn’t have to be $60.

People spend $1,000 on a Mac computer, which can barely play video games. Whereas you can spend that and the money of a $250-$300 console, and have a great gaming computer to play all those cheap Steam sales games. You can purchase Steam titles, along with other platforms through a site called SCDKey.

SCDKey enables you to purchase online codes and keys to download and play video game titles cheaper than physical copies also. After purchase, the website will email you the key. The estimated time is 10-30 minutes – then you can start playing the latest game without leaving your couch.

Sony and Microsoft also try really hard to make consoles powerful, but PC with its customizable hardware and brute strength will always put them to shame and look and play better.

Torrenting is like downloading but from a group of peers; not a direct download from one source. The act of torrenting in itself isn’t illegal, but when the material shared has an official copyright, it’s theft.

Generally, paid software has coding that requires a connection to a company server to know that it was legitimately acquired, be it through signing into Adobe Suite or starting through a system like Steam. This is to stop people from just distributing the files to others to play without paying.

The process of changing the software so this legitimacy check isn’t required is called “cracking” and there are groups of people whose hobby is doing this to everything from Photoshop to AAA games.

Some people then distribute this cracked copy to certain torrenting websites and people download and play for free.

This is something people do. Illegally. You could too, but don’t say we didn’t warn you. Because did we mention that it’s illegal?

If the PC part didn’t convince you that a computer will be cheaper than consoles, then Craigslist is a good, final check for cheap games old and new.

You can pick up the “Witcher III” for PS4 for $10 – compared to $25 at GameStop. Or maybe a 500 GB Xbox One with eight AAA games and a headset for $220 – there are tons of cheap games and consoles. The only issue is it all depends on location, but it’s always a good idea to check with your local gamer classifieds.